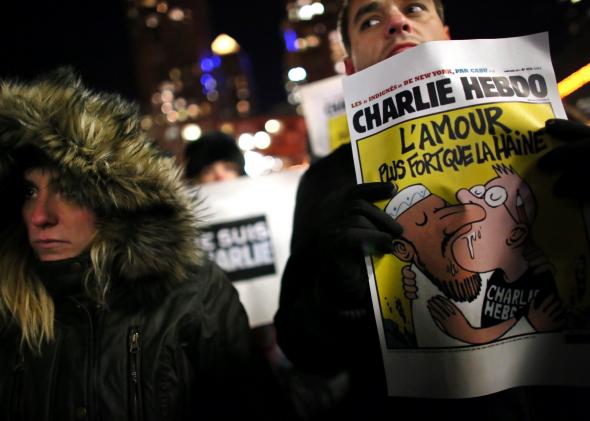 „Despre rîs şi democraţie în istoria europeană, de Simon Schama, în Financial Times: „Satire became the oxygen of politics, ventilating healthy howls of derision in coffee houses and taverns where caricatures circulated every day and every week. James Gillray, the greatest of all the caricaturists, was in such demand that Hannah Humphrey, his publisher, would rent out entire albums of his choicest items for a night’s or a weekend’s entertainment. Good fun was to be had by all perusing images: a grossly bloated Prince of Wales recovering from a night’s dissipation; William Pitt, prime minister, as a toadstool growing out of a dunghill; or a cartoon of Queen Charlotte, pendulous breasts nakedly exposed, holding at bay the prime minister and the Lord Chancellor.”

Un punct de vedere critic echilibrat la adresa satirei practicate de Charlie Hebdo, din perspectiva echilibrului între umor şi respect faţă de celălalt, de David Brooks în New York Times: „The first thing to say, I suppose, is that whatever you might have put on your Facebook page yesterday, it is inaccurate for most of us to claim, Je Suis Charlie Hebdo, or I Am Charlie Hebdo. Most of us don’t actually engage in the sort of deliberately offensive humor that that newspaper specializes in.// We might have started out that way. When you are 13, it seems daring and provocative to “épater la bourgeoisie,” to stick a finger in the eye of authority, to ridicule other people’s religious beliefs.// But after a while that seems puerile. Most of us move toward more complicated views of reality and more forgiving views of others. (Ridicule becomes less fun as you become more aware of your own frequent ridiculousness.) Most of us do try to show a modicum of respect for people of different creeds and faiths. We do try to open conversations with listening rather than insult.”

Un articol în The Guadian, care arată, în baza unor date oferite de nişte sondaje recente, că societatea franceză este preocupată de identitatea ei, sub impactul unei imigraţii care aduce alte norme şi valori decît cele stabilite: „Since 2011, immigration is the fastest rising issue of concern among voters. It is also the issue voters least trust the country’s two main parties to handle effectively. // Seven out of ten voters believe that parts of the immigrant community have failed to integrate into France over the past 30 years. Half of these respondents think this applies to the majority of immigrants living in the country, and nearly all (85%) blame immigrants for not making the required effort needed to integrate.// Racism is widespread in France according to 75% (with more than one in ten even claiming that it is acceptable). Some 70% think it is wrong to serve food adhering to religious beliefs in school canteens, and 65% find immigration levels in the country to be out of control.// Looking at the Muslim community specifically, 63% of French voters in the Ipsos study said that Islam isn’t compatible with the values of French society. Looking at other religious beliefs, 24% said the same for Judaism and 9% for Catholicism. Almost three-quarters, 74%, said Muslims want to impose their values on others.”

Emmanuel-Pierre Guittet despre starea suspiciunii generalizate: ”That particular negative anthropological view of human beings where everyone is always a potential suspect is certainly reinforced by our reliance on automated forms of identification and verification and by the monitoring surveillance technologies we use nowadays. The more incidents of distrust one might witness through the lens of computing suspicion and patterns of deviance, the more it begets a generalised perception of natural human dishonesty. A general mistrust perhaps, such that even “regular” behaviour could come to be seen as too suspicious to be true. There is no limit to suspicion. Everything and everyone can logically be part of it. In this view, the realm of surveillance ought to extend to a class of putative suspects so large that, in order to monitor and pre-empt their possible future violations, it becomes necessary to survey and scrutinise everyone. The preventive logic of “far better to prevent terrorism before it happens than to investigate and prosecute after a tragedy” is largely shared. But excessive and forceful governmental reactions to real and alleged terrorist activity have very often resulted in the miscarriage of justice. From Northern Ireland to Guantanamo, we cannot ignore what happens when governments circumvent the fetters of criminal prosecutions and use military law to detain and deport individuals suspected of terrorist activities. In too many cases we have witnessed how presumption of innocence has been transformed into a presumption of guilt. (…) Generalised suspicion might be the ultimate destroyer of the social fabric as it thrives on betrayal and fosters mutual distrust and demoralisation. In effect, one might say that the possibility of being beyond suspicion has been forsaken.”

Sociologul Saskia Sassen publică, pe Open Democracy, fragmente (unu + unu) dintr-o nouă carte a sa despre economia globală: ” Economic growth has never been benign. But the escalations of the past three decades mark a new epoch in that they threaten a growing number of people and places throughout the world. Such growth still takes on distinctive formats and contents in the mix of diversely developed countries we refer to as the Global North, versus the mix of less or differently developed countries we refer to as the Global South. For instance, predatory elites have long been associated with poor countries that have rich natural resources, not with developed countries. Yet increasingly we see some of this capture at the top also in the latter, albeit typically in far more intermediated forms. We are seeing the making not so much of predatory elites but of predatory “formations,” a mix of elites and systemic capacities (with finance a key enabler) that push toward acute concentration. Concentration at the top is nothing new. What concerns me is the extreme forms it takes today in more and more domains across a good part of the world.”

În chiar primele zile ale anului a decedat sociologul și filozoful german Ulrich Beck, autorul conceptului ”societatea riscului”. Un fragment dintr-un articol al său despre viitorul Europei: ”Individuals should be able to feel that not all of the risks of the world, and especially not those of banks and states threatened with bankruptcy, are being dumped onto their shoulders. But that something exists that deserves the name “European Community”, because it takes the renewal of social security in these unsettled times as its programme and guarantees it. Then the auspicious concept ,“European Community” would stand not only for the experience of freedom and for the maximization of risk; not only for an epicurean Europe, but also for a social Europe!”.
Și un altul, un interviu despre securitate și supraveghere în lumea online: ”For example, let’s consider the risk of a global digital empire. Calling this an ‘empire’ might give some idea of what it involves, but on the other hand the concept of an empire doesn’t really fit the historical specifics of this kind of risk. This is because we’ve never had an empire – not the Roman Empire, nor any of the other empires – in which the lives of all of the individuals within that empire are entirely transparent and can be monitored. There has never been a situation like this in human history, where this level of surveillance can go beyond social and territorial units. It’s a fundamentally global issue because of the new possibilities of the digital age. This is a big danger. Part of the problem is that it is a risk to freedom: freedom of speech, and the right to privacy. We have many institutions at the national level which are trying to cope with this risk, however even in their functioning they are failing because they don’t have the resources or the means to confront this risk. Even national constitutional protections fail because while they might have worked with letters and other communications, they struggle to deal with digital communications. Another element is that we don’t feel as though our freedom is being violated. There is no physical coercion, and we even uphold an illusion that better technology can provide answers to the problem. Like other risks, it is completely decoupled from our self-perception. And this again is a big danger. We could find ourselves living in a global state of surveillance and we wouldn’t even recognise it until it was too late. Any new social contract designed to win over individuals to the European cause must answer the question: how can we reconceptualize the realistic utopia of social security so that it does not end, as it does at present, in one of two dead ends – either the defense of national welfare-state nostalgia, or the reforming zeal of neoliberal self-sacrifice? How can we square the circle of elevating European politics to the level of transnationality, while at the same time winning national elections?”

Joseph Stiglitz în Social Europe despre problemele zonei euro: ”Those who thought that the euro could not survive have been repeatedly proven wrong. But the critics have been right about one thing: unless the structure of the eurozone is reformed, and austerity reversed, Europe will not recover. The drama in Europe is far from over. One of the EU’s strengths is the vitality of its democracies. But the euro took away from citizens – especially in the crisis countries – any say over their economic destiny. Repeatedly, voters have thrown out incumbents, dissatisfied with the direction of the economy – only to have the new government continue on the same course dictated from Brussels, Frankfurt, and Berlin. But for how long can this continue? And how will voters react? Throughout Europe, we have seen the alarming growth of extreme nationalist parties, running counter to the Enlightenment values that have made Europe so successful. In some places, large separatist movements are rising. (…)  The left opposition Syriza party, which is committed to renegotiating the terms of Greece’s EU bailout, is ahead in opinion polls. If Syriza wins but does not take power, a principal reason will be fear of how the EU will respond. Fear is not the noblest of emotions, and it will not give rise to the kind of national consensus that Greece needs in order to move forward. The issue is not Greece. It is Europe. If Europe does not change its ways – if it does not reform the eurozone and repeal austerity – a popular backlash will become inevitable. Greece may stay the course this time. But this economic madness cannot continue forever. Democracy will not permit it. But how much more pain will Europe have to endure before reason is restored?”

În 2015 se împlinesc 800 ani de la adoptarea, de către regele englez John a documentului care avea să fie cunoscut sub numele Magna Carta, un act ce marchează începutul epocii ”drepturilor și libertăților omului”.
John Crace pe Eurozine: ”Ironically, though, it is Magna Carta’s weaknesses that guaranteed its survival. Over the centuries, Magna Carta has become the symbol of freedom rather than its guarantor as different generations have cherry-picked its clauses and interpreted them in their own way. While wars and poverty might have been the prime catalyst for the Peasant’s Revolt against King Richard II in 1381, it was Magna Carta to which the rebellion looked for its intellectual legitimacy. The Freemen were now seen to be free men; constitutional rights were no longer seen as residing in the few. The King and his court were outraged that the peasants had made such an elementary mistake as to mistake the implied capital F in Freemen for a small f and the leaders were executed for their illiteracy as much as their impudence.”