Home » Where is Gayropa? On the Dangers of Geo-politicizing Gender 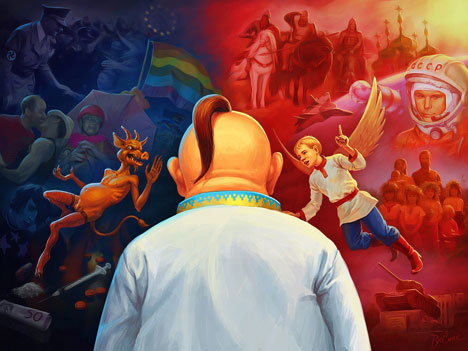 A dangerous development in public opinion across several post-Soviet countries has been unfolding in the past years, intensifying at the onset of Euromaidan. While viewing virtually any question of public policy through the lens of geopolitics has become perversely normal here, framing  gender equality as taking an explicitly “pro-European” or “pro-Western” stance is particularly worrying. Human rights NGOs and activist groups, especially in the countries of the Eastern Partnership, are forcibly drawn into a fight, which is not theirs and which they cannot realistically win under these terms. Instead, local and transparent ownership of human rights activism unravels this destructive binary across communities.

Kyiv, November 2013. As Ukraine approaches the much-expected signature of the Association Agreement with the European Union, posters of all possible sizes across the entire metro system warn the citizens that “in Europe” men pair up with men, and women pair up with women. In other words, Europe is the land of sexual deviancy, and by associating itself with Europe, Ukrainians risk losing their grip on normality. In post-soviet countries, Gayropa[1] remains an aggressive and carefully orchestrated strategy to present gender equality as a foreign policy option, and many commentators and civic activists fall prey to this false dilemma. However, geo–politicizing gender[2] has served and continues to serve exclusively the purposes of reactionaries that idolize either Putinist machismo, or the fundamentalist discourse of the Russian Orthodox Church. As the latter has little to no influence among Muslim communities, the former prevails, and one can always add a little extra “Islamic tradition” to it[3]. Tu put it briefly: geo-politicizing gender only benefits those opposed to the progressive cause.

The foremost danger of attaching gender equality to a certain geopolitical stance is the induced presupposition that a concrete geographic place, emanating the ideal of gender equality, can be found on the map (somewhere in the West). There are two issues with this assertion. First, no such place exists. The struggles for gender equality are far from over even in countries that are assigned the lowest gender inequality indices[4] and are widely regarded as progressive. Reproductive rights, gender-based violence and discrimination, under-representation of women in leadership roles, the gender pay gap, are major themes of these struggles, and ever greater efforts are necessary to make these struggles more intersectional. Therefore, the reactionary portrayal of the West as an equality paradise is factually wrong, and gender equality activists should be very clear on this aspect despite their own geopolitical preferences.

The second issue with assuming that an ideal of gender equality has been realized in Europe or elsewhere in the West is that doing so directly supports the Putinist rhetoric of two competing social models: Gayropa – the debauched culmination of Western history, and Russia – the temple of normality and stability. Unfortunately for progressives, conservatives, and reactionaries alike, this alleged clash is entirely constructed, as both so-called models differ only in the shares of military interventionism, tax evasion, racism, and environmental destruction that they add to their policy mix. A critique of our neoliberal times is necessary across the board, and human rights NGOs have a strong case to build solidarity beyond geopolitics.

The situation of those “pro-West” or “pro-Europe”, who are in fact conservatives, i.e. against any meaningful advancements in gender equality or emancipation of LGBTQI people, is more complex. Full of woefulness about the USSR and Russia, they dream of enjoying the social benefits of an average American or EU citizen, but feel strongly against measures like abortion or same sex marriage[5]. These cherry-pickers of the idea of ‘the West’ are particularly difficult to engage in this debate, and risk being further alienated from the progressive cause if this continues to be presented to them as irremediably attached to their geopolitical option. The solution lies in attempting to build solidarity through aspects that unite people, such as the fight against poverty and corruption, while continuously reinforcing the fact that these fights, as well as that for gender equality, are ongoing everywhere in the world.

Overall, it is imperative to build strong local ownership of human rights programmes, thereby intensifying advocacy efforts that pursue piecemeal and concrete legislative change. This means that there is more work for everyone, donors and implementers alike. While it is certainly true that most funding, if not all, comes to the Eastern Europe and Central Asia region from Western foundations and governments, supporters must be won massively among fellow citizens if change is to take place. Moreover, despite the fact that country ownership has become an important goal of international development in the recent years, few donors have the capacity to truly grasp the local contexts and thus make sure tailored programmes are developed. Human rights NGOs and activist groups must therefore adopt a hands-on approach to how their message is being crafted and delivered.

By understanding the dangers of geo-politicizing the struggles for greater gender equality, human rights NGOs and activists can counter its adverse effects, thereby winning supporters among conservatives. Breaking down the concept ‘gender’ into concrete and solvable policy challenges cuts right across geopolitical divides in societies. Moreover, they can help expose the reactionaries’ alleged call to protect normality, by revealing what it really is: a tactic to divide society, spread hatred, undermine human dignity, and equally important, divert public opinion from issues such as acute poverty and deep-seated corruption.

Note: For an illustration of the terms “progressive”, “reactionary” and “conservative” used in this article, see definitions and discussion in Mark Lilla, Our Reactionary Age, available here: http://www.nytimes.com/2016/11/07/opinion/our–reactionary–age.html (in English).

[1] Oleg Riabov, Tatiana Riabova, The Decline of Gayropa? How Russia Intends to Save the World. Available here: http://www.eurozine.com/articles/2014-02-05-riabova–en.html

[5] As human rights activists learned during the presidential campaign in Moldova, when the “pro-European” candidate publicly dissociated herself from the alleged support of the LGBT community, gender equality is not automatically on the agenda of “pro-European” politicians. Evidently, this presupposed support was in fact fabricated by her reactionary, “pro-Russian” opponent. More on the geo-politicization of gender stereotypes in this campaign can be found in На грани пола. Как политики играют на гендерных стереотипах, семейных ценностях и фобиях, Newsmaker.md, available here: http://newsmaker.md/rus/novosti/na–grani–pola–kak–politiki–igrayut–na–gendernyh–stereotipah–semeynyh–tsennostyah–i-28032 (in Russian).