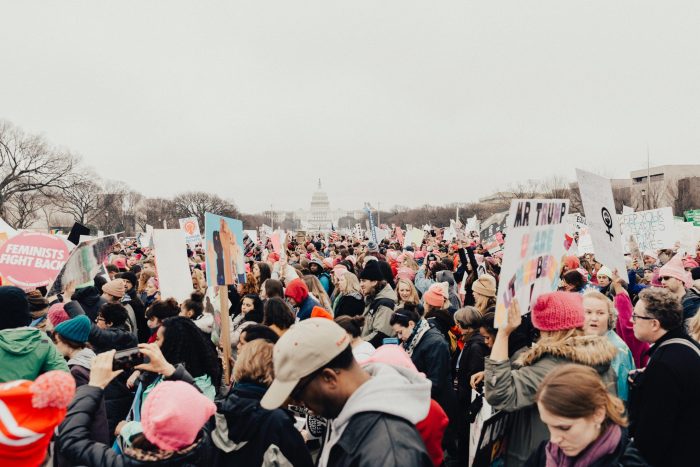 the Romanian version of the article can be read here.

To be able to understand what neoliberal feminism stands for, we need to first understand the core principles of neoliberalism.

Neoliberalism in essence advocates for no government intervention and advances restructuring policies that shrink the public sector and deregulate the private one – the belief is that markets can regulate themselves through “fair competition”.

The 1970s marks the decade when neoliberalism took over the global economy. A recovered post war Europe and Japan, a miracle economy, could compete with the US’s hegemonic position. In order to revive the pace of growth, several strategies had to be implemented.

One of them was de-industrialization – moving manufacturing to the Global South to take advantage of cheap labor and the establishment of export processing and free trade zones. This was a win win between foreign corporations and national governments. The former would see their profits increase and the latter would have foreign currency and could market “progress” and “employment” to their populations. Other domestic areas of production that could not be outsourced looked to reduce costs through automation and immigrant labor.

The 70s also saw the collapse of the Bretton Woods system which deregulated global finance and allowed it to infiltrate other arms of the economy. If before the 70s most investment flowed in the production of goods, after Bretton Woods, investment went into speculation with complex financial instruments.

Neo-liberal restructuring policies were imposed in the developing world through international bodies such as the IMF and World Bank. This meant privatization of public functions (water, electricity, education, transportation, healthcare), deregulation, financialization, and an open invitation to corporate multinationals to maximize their profits through extraction of resources and exploitation of local people.

But neoliberalism has tentacles extending beyond a laissez faire economy and deregulation of markets. Most interesting for our topic is neoliberalism’s impact on society, the individual and our perception of the self. Wendy Brown, a political scientist, argues that neoliberalism is promoting the marketization of every sphere of life, from the political to the individual. It’s the belief that society comprises individuals pursuing self-interest, or in the words of Catherine Rottenberg, “entrepreneurial individuals and capital enhancing agents”. This means that everything is seen through a market lens, everything is assessed based on cost-benefit principles, and anything can become an opportunity for profit making.

Understanding neoliberalism’s dogma is key in understanding how neoliberal feminism instituted and how its representation in the media obscured radical feminist movements worldwide.

The rise of neo-liberalism in the 70s and the globalization of the economy coincided with the rise of a new brand of feminism, one that Hester Eisenstein calls “feminism for the 1%”. This feminism puts the individual at the front and center and propagates the belief of developing and “empowering” individual women to achieve economic prosperity.

This variant of feminism abandons essential key terms such as “equal rights” and “liberation” and instead advocates for a life of “balance” and “happiness”. It encourages women to work harder, to become more disciplined, to control their emotions, to organize their day better in order to achieve it all. The face of this brand of feminism is the successful business woman that somehow manages to keep her business successful, and have a very satisfying family life. You can do it as well, she would tell you, you just need to be more disciplined. Rarely do we see the faces of the other women making it all possible for her to become and stay successful- the working women caring for her home, her children, her elderly.

It would definitely be cynical to attribute success, wealth and power to individual merit. We all know that the story of “work hard and you can achieve anything you want” is simply a myth. A single mom working two jobs and skipping meals to feed her children can’t possibly be expected to work harder or be blamed for being undisciplined.

Angela Davis well mentioned that “being a rich and a powerful woman does NOT make one a feminist.” In fact, rich and powerful women are unlikely to engage in the feminist struggles of the working class, specifically because that would mean dismantling the system that made them successful in the first place. Radical feminism has always recognised that oppression is ingrained in our political and economic systems and therefore aimed at addressing the power structures that continue the cycles of injustice and inequality.

The problem with neoliberal feminism is that it does not challenge the status quo, it is exclusionary and it justifies exploitation, exploitation of women who do all the work that makes it possible for a few women to climb to the top of the hierarchy. It’s not enough to change the faces occupying leadership positions. Having more female representation is undeniably inspiring, but in essence it reaffirms the inherently unjust and unequal power structures in the name of “girl power”.

But even within mainstream feminism there is a spectrum of issues addressed. On the one end we have the proponents of #leanin who encourage women to speak up and to work harder to get into leadership positions. On the other end we have public figures such as Melinda Gates who define themselves as feminists and engage in important advocacy for gender equality, reproductive health, and woman empowerment. This latter end of the spectrum is quite interesting and is definitely too complex to label it as just right or wrong. At first sight, we can’t help but admire such women who spend a lot of their resources and efforts in corners of the world that are most forgotten. Their contributions undoubtedly bring a positive impact. But they, nevertheless, fall under the same neoliberal umbrella.

Liberal feminism in this case individualizes the problem. It sees the poor girl that does not have access to education and focuses on getting that girl into school. Although an important step, it doesn’t see the problem in a holistic, political context. It doesn’t ask why that girl is out of school in the first place. It sees this issue as an unfortunate or perhaps even a failure of a corrupt government. It does not recognize the fact that a global capitalist economy thrives on extraction and exploitation that keeps communities poor and in our example, that girl out of school. Liberal feminism doesn’t address the structures that make it possible for Melinda Gates to become a rich and powerful woman while so many people don’t have access to the most basic needs. Humanitarian aid addresses the symptoms, not the root causes of the problem. As Lola Olufemi mentions in her brilliant work “Feminism, Interrupted”, “The neo-liberal model of feminism argues that „inequality” is a state that can be overcome without overhauling the system, centralises the individual and their personal choices, misguidedly imagines that the state can grant liberation, seeks above all to protect the free market and fails to question the connection between capitalism, race and gendered oppression.”

Neoliberal feminism simplifies problems and reformulates them in market-friendly terms. And that in turn legitimizes a worldview that is hostile towards the majority of women. Feminist work that does not raise critical questions and only seeks power does not care about justice.

This is something radical feminists have pushed against for decades. They identified social, political and economic structures that were oppressive and targeted them. They were working towards collective improvement across borders, not individual ego boosts. They recognised that radical work is work that looks beyond nations because the structures of oppression everywhere are connected and interlocked. COVID-19 and the unavoidable economic recession are a contemporary proof of the interconnectedness of our world and the problems and systems that affect us all. And so, the current pandemic is exposing many issues on the feminist agenda – domestic violence, care work, social reproduction, economic austerity, inequality – in a more critical light. For when we discuss going back to “normal”, we need to ensure that we re-define and question what “normality” is.

We need radical feminism to help us navigate complex problems, to question power structures and to envision a new world. For feminism is a political project about what could be as Lola Olufemi well put it. And it’s a project of solidarity, of working across difference, of resisting shared oppression and even standing along those who have a completely different experience of the world.