Home » Whose Europe? Whose world? 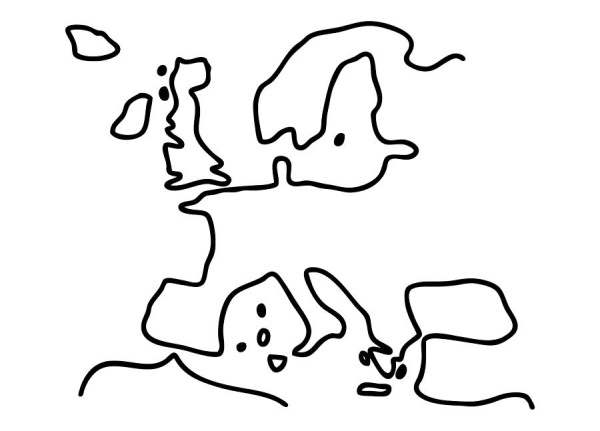 As a Moldovan I find it particularly difficult to talk about Europe. Of course, Europe is a complex topic but so is almost any political and/or cultural topic.

When I was studying in the US people would ask me where do I come from. “Moldova”, I answered. “Where is that?” … “In Europe?” … “Where exactly?” … “A country between Romania and Ukraine.” … “Is this close to France or Italy?” … It is easy to make fun of, in these instances, the supposedly geographical ignorance of ordinary Americans but I would bet that even some distinguished intellectuals are not aware that the confusion of some Americans is perfectly justified: some European borders (including the borders of territories or state departments of some European countries) for example, the one between French Guiana and Brazil is much closer to Washington DC or Ottawa than to Paris or Marseille. Later, when I was on vacation in Thailand, beach vendors and hotel workers were asking me directly what part of Europe am I from. I remember that I asked one of them how they know that I am from Europe and not from the US or Canada (other countries where white males live) and the answer surprised me: people from the US or Canada are constantly smiling, even in the most serious of circumstances, while Europeans appear more serious, even when they are happy and joyful, as if in each and every moment Europeans have to think about the hard questions: what is the meaning of life, what are black holes, and so on.

At some point later I started to travel often between European Union countries in order to meet with fellow activists and speak at conferences and meetings (I have even done a stand up on the decline of social-democracy on the Swedish island of Gotland). There were, at all of these meetings, discussions about Europe. Some were optimistic – I remember comrades from Podemos (Barcelona), Pravo na Grad (Zagreb) or Razem (Poland) dreaming about the days that they will have an opportunity to build a more just, equal, and inclusive Europe. Others were more pessimistic – the resurgence of the right wing in Poland, Croatia, and Hungary was sending strong worrying signals across the continent: public funds for independent cultural initiatives were being cut, xenophobic discourses were becoming normalized in almost all countries, and censorship seemed to be back in fashion again. But I couldn’t miss the point that was a unifying feature of all these discussions: when talking about Europe they were talking only about the European Union (whose borders, if you believe conventional geography textbooks, stop right next to the very center of the subcontinent of Europe – a rather obscure location in Western Ukraine). Moldova (as well as Ukraine, Belarus, and Russia) is excluded from these discussions about Europe or only included out of courtesy (as honorary, but still, voiceless guests).

At the local level, in Moldova, politicians, writers, and journalists rarely think or write about Moldova as a European country. Rather, Europe is something very different, not only geographically and politically, but also civilizationally. They have already internalized the conceptual framework “Moldova is not yet Europe” and they have built an imaginary Europe that is everything Moldova is not: prosperous, tolerant, inclusive and so on. Europe, in this sense, is a paradise that waits to be conquered, that will be offered as a reward after we, Moldovans, complete our necessary quantity of sacrifices and pain. The best example of this Europe as a dreamland of aspiration is that most of the politicians that governed Moldova after 2005 came to power on a promise to keep the country on the European pathway and where possible, to deepen this pathway. Should I mention that Moldova is as far from joining the EU in 2019 as it was back in 2005?

These rather idiosyncratic accounts of the many understandings of Europe (some of them mutually exclusive or incompatible) being used by many people in various contexts and places are an indicator, for me, that thinking about Europe only in terms of Europeanness (whatever that means!) is part of the problem that Europe wants to solve. Europe is obsessed with looking for another idea of Europe. Look at the progressives: they criticize the EU for its democratic deficit, for its neglect of peripheries, for the privileges it gives to the rich and powerful, but they are afraid to think large: what if EU stops being centered on Europe and expands the model of political-societal-cultural-economic integration on a global scale? Look at the right wing: they criticize the EU for its alleged elitism, bureaucracy, and multiculturalism and want to retreat back to the confines of the Nation-state (while keeping some of the outsourced industries and agricultural subsidies they receive from Brussels). It is this unwillingness to think about Europe outside its connection to a specific place and its supposedly ‘exceptional’ destiny that traps many discussions about Europe today – let’s face it, when examined closely European history is full of wars and conflicts and is anything but exceptional: Europe has had just better luck with people writing its history.

What if the idea of Europe is to be decoupled from the subcontinent bearing the same name?

What if the idea of Europe ceases to indicate a place and starts to indicate a process (whereby people can overcome centuries of hatred and enmity and start to build a peaceful present for a prosperous future)? What if the idea of Europe is stripped of another of its ‘imperial’ attributes – the belief that Europe is something exceptional in the history of mankind – and becomes just another project put on the grand table of the future of mankind, one model among many others? What if, as arrogant as it is now, the idea of Europe could acknowledge the incommensurable damage it has done to other cultures and starts to learn from them other ways of relating to the world? After all, learning the ideas of Ubuntu in relationship to other human beings or Pachamama in relationship to nature will bring only benefits. These questions might not yet have easy answers. But they show a direction. If Europe, this unfinished idea (and all the good ideas have to be left unfinished), is to move forward, it has to look less at the past and more into the future. It has to think less about what is so exceptional in its past and more at what newness it can bring into the current, diverse, dynamic and complex world.

This text is part of the publication ”Whose Europe? The “New Europe” and Controversy around the European Idea”, edited by Larissa Agel, Michaela Geboltsberger, Georg Schöllhammer, Kai Vöckler and published by Tranzit (Austria).