Home » The NEC “Black Sea Link” Yearbook 2013-14: a multidimensional insight into the history of the Black Sea Region 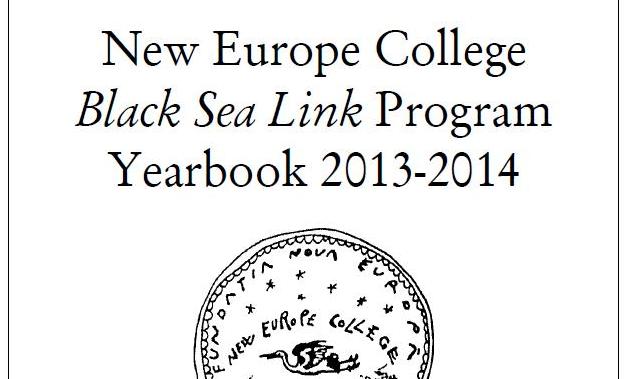 The contributors to this volume are scholars of the NEC Black Sea Link program, coming from countries of the Black Sea area: Georgia, Azerbaijan, Russia, Moldova, and Romania. The articles in this volume are thematically linked to each other, at least by their common reference to that region. The approaches are different but complementary: social anthropology, cultural history, social history, political science, international relations, political sociology and international law. Most of these studies use a systemic approach, putting their respective objects in a broader regional and international context, often in a comparative perspective. The topics that the articles are dealing with are the following: the artistic interventions in the Bucharest public space; the censorship institutions in the USSR and socialist bloc countries; national and neo-imperial interests of Russia and the US in the Caucasus and the Middle East; the Holocaust in a small town in Transnistria (Moldova); the representations of neighboring countries in the history textbooks in Moldova and Romania; the Russian nationalism and/or imperialism; Azerbaijani post-Soviet diaspora and how it’s been constructed and politically utilized; the right of association of trade unions represented in the European Court of Justice.

In his article, David Chigholashvili (“Imagining Public [Space]: Socially Engaged Interventions and Transformation in Bucharest”) tries to see how various initiatives of “artistic activism” have intervened in and transformed Bucharest’s ‘public space’. These interventions, that reproduce a regional / international pattern, are largely based on the fact that the ‘public space’ of this post-socialist city was seized by various vested interests. Therefore interventions of these activists and artists seek to recover the urban space for citizens’ benefit. The author also examines the contradictions generated by these interventions involving various stakeholders: private businesses, civil servants, different conceptions of artistic activism, ordinary citizens. These ‘artistic’ interventions produce in a way a ‘public space’ – a ‘public sphere’ (as it was theorized by J. Habermas) -, where private interests, city dwellers, public officials and activists negotiate their right to benefit of a certain public urban space. Finally, these interventions contribute to reshaping the city public space, though often irrespective of the artists’ initial intention.

The paper authored by Liliana Corobca (“Censorship Institutions in the Countries of the Communist Bloc”) describes the institutional censorship machine built in the communist bloc countries after the Soviet model (Glavlit) and lists the tasks assigned to these institutions. It is curious that such an institution of censorship (as Glavlit) did not exist in all the countries of the socialist bloc (i.e. Hungary and East Germany had no such institutions). This does not mean that there was no censorship in these countries, but that this function was taken over by a number of administrative and party institutions, by institutions in charge of publishing books periodicals, film production, etc. The author curiously mentions that Nazi Germany and the countries of Western democracy had no such censorship institutions, without specifying that various forms of censorship existed however, and quite intense ones, outside the USSR and its satellites, including in democratic countries like USA, and a fortiori in the Nazi Germany.

Elnur Ismayilov (“Clash of Russian-American National Interests in the South Caucasus and Central Asia”)  analyzes the stake interests of Russia and the US in the Caucasus and Central Asia (in the former USSR), in a context in which the bipolar international system was abruptly transformed after 1991 into a unipolar international system dominated by the US. After his arrival to the Russian leadership in 1999, Putin has been challenging the attempts of hegemony exercised by the US in the regions, attempting to restore its influence in the former republics of the Caucasus and central Asia. A clear-cut turning point in this trend was marked by the intervention of Russia in Georgia in 2008. Russia’s and the US’ strategic interests also seek a greater control over energy resources. Written in 2013-2014, the article does not take into account the episode of Russian intervention in Crimea and Eastern Ukraine, although it seems to anticipate it.

Alexandru Leşanu (“Holocaust in a Transnistrian Town: Death and Survival in Rybnitsa (1941-1944)”) proposes a very interesting study of local history & microhistory of the Holocaust in a small town on the left bank of the Dniester River, in Transnistria. Leşanu starts its research by applying Jan Gross’ model developed in his book Neighbors (about a Polish village, Jedwabne, in which, according to Gross, numerous local dwellers played a major role in the massacres of hundreds of Jews of the village). Based on some archival sources (documents from the trials of the Moldavian SSR in 1950-1955 of collaborators with the occupation forces in the Second World War) and secondary sources, including testimonies, the author argues that, unlike the case analyzed by Gross, his case “seems to confirm that the participation of the local non-Jewish population in the destruction of their Jewish neighbors was more a result of a passive observation rather than of active participation. In comparison with the trials of the Jewish leaders from Transnistria, the same trials from Bessarabia mentioned actions of mass killings.” I recall in this context that Diana Dumitru, also scholar of the same program in 2014-15, wrote an article for the yearbook of 2014-15 (still unpublished), which is part of a broader research (a volume is forthcoming at Cambridge University Press) about the participation of locals in massacres and repressions of the Jews of Bessarabia.

Sergiu Musteaţă, another Moldovan historian, also speaks about neighbors (“We and our Neighbours: What We Know About Each Other. History Teaching and Textbooks in the Republic of Moldova and Romania”), but in a more peaceful context – still a battle, though symbolic – the history textbooks in Moldova and Romania between 1991 and present days, namely Romania’s representation in Moldovan textbooks and that of Bessarabia / Moldova in the Romanian textbooks. The conclusion of the article is that in both cases, the Moldovan and Romanian school textbooks are a battlefield where diverging political agendas are struggling. The image of the close Other is specifically an element of controversy between the ideological agendas advocated in the history textbooks. It is to note that if history textbooks in Moldova are the object of controversy between the “Romanianists” and “Moldovenists” camps (i.e. two ethno-nationalist agenda), in Romania this dispute is mainly taking place between the supporters of a national history model and the proponents of a “modernist” vision of historical discourse.

Elena Pavleeva is the author of a very interesting paper in this volume (““Nationness” in the Russian Empire: Approaches to the Study of the Phenomenon”), although it does not propose an original research based on empirical data, but rather an in-depth literature review on the issues of nation and various forms of nationalism in Russia in the 19th century and early 20th century. Most researchers and theorists consider the dichotomy of nationalism vs. imperialism while studying the creation of the Russian nation and Empire in the 19th and 20th centuries. Unlike the European nations that formed over-seas empires in the 19th century, Russia had started to create a modern Empire before building its nation. This partially explains the hesitation of Russian national discourse between imperialism and ethno-nationalism. However, this dichotomy (nation / empire and nationalism / imperialism) should be seen as two parts of a single, though not homogeneous, phenomenon. Moreover, one is not reducible to the other, concludes the author, but must be studied in complementarity.

One of the most interesting studies in this volume is, in my view, that of Sergey Rumyantsev (“Post-Soviet Diaspora-Building Process and the Transnationalization of the Politics of Memory”) about Azerbaijani diaspora and how it was formed and used by the Azerbaijani government after 1991 in order to promote abroad, especially in Western countries (EU and US), the official vision of the Azerbaijani state policy in a number of disputed issues, especially on the war with Armenia (1989-1994). Rumyantsev shows how Azeri state has built an official national discourse centered on the symbolic figure of Heydar Aliyev, the last Party general secretary in the Soviet Republic of Azerbaijan and independent Azerbaijan’s first leader until his death in 2003. Aliyev is also the founder of a dynasty which continues to be in power in Azerbaijan so far. Aliyev’s monuments appeared in several European cities, including Bucharest and Chisinau. These official initiatives constitute a sort of “diplomatic courtesy” ritual performed abroad. The Azerbaijani diaspora may be thus seen as an artificial construct intended to establish a “bureaucratic and discursive cohesion” of an alleged transnational Azerbaijani community (but not necessarily Azeri in the ethnic sense), opposing itself to other diaspora communities, especially the Armenian one. This state-sponsored diaspora aimed at fostering and spreading a national discourse and foreign policy in accordance with the Azerbaijan State’s official position.

Each of these articles is worth reading, not just by specialists in the matters, but also by all those interested to broaden their horizons of knowledge in the recent history of the Black Sea region. I wish you a pleasant reading!